The Marshall Chess Foundation is a not-for-profit 501(c)(3) corporation formed by the Marshall Chess Club in 2008 to promote, through funding and other means, the study, play, and appreciation of the game of chess as a means to emotional and intellectual development. 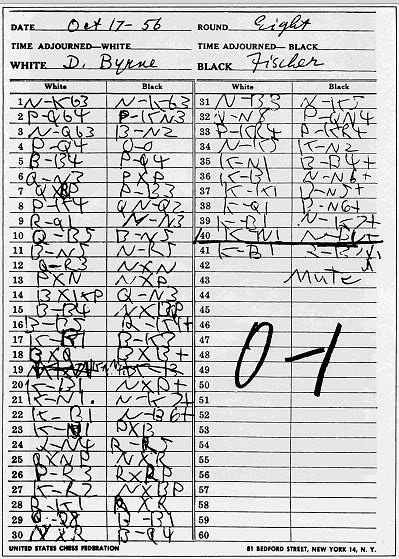 The Foundation has helped individuals of all ages to stay mentally and socially active through chess activities. It has sent players, young and mature, to tournaments they otherwise could not have afforded and it has organized senior chess events for the local community, such as lectures, instruction and casual play.

The Foundation’s primary focus has been on educational programs for children that promote proficiency in the art of chess, enhance intellectual acument, and develop social skills, such as sportsmanship, self-discipline, respect for others and individual responsibility. The Foundation’s youth educational programs seek to stimulate the love of learning and studying, and to provide an opportunity for positive social interaction between young people from different backgrounds, communities, and cultures.
*Image is the Byrne-Fischer “Game of the Century”. The Foundation has accepted and maintains the Bobby Fischer archives.

Since its founding, the foundation has sponsored major tournaments such as the annual New York International, the monthly Marshall Masters and the Marshall Chess Club Championship.

The foundation has offered financial assistance to indigent chess players as well as supported low income students and master players to attend tournaments.

Other programs we support include classes for kids, supplying chess equipment to schools, prisons and children’s programs in Africa. Check out our Programs page for details.

The foundation has accepted and continues to maintain the Bobby Fischer archives.

Frank Marshall wrote: “I look upon chesss as a contest of intellect and character over the open board. It is a game of life, in which the player should be ready to give and take. He must be ready for any condition that may arise, as in every other battle of life.” In that spirit, the Foundation is committed to developing the intellect and character of all, young and old, through that “game of life” that is chess. Its focus and major priority is to make available low-income children scholarships to the club’s programs.